Last winter I got hooked on ski touring; the art of skinning uphill on skis. I’d tried it a few times before on work trips, following a guide to reach backcountry powder stashes. But I’m not confident enough in my avalanche knowledge to head into the wilds of the Alps without a guide. Thankfully, the Tirol boasts a few former ski resorts that have no lifts but risk-free slopes. For touring beginners like me, they are perfect.

One such spot is Sattelberg, close to the Italian border. It was once a ski resort, with a chair and a couple of long drag lifts carrying skiers up to the peak. Sadly, like so many smaller ski areas, the cost of upgrading and maintaining the lifts was too great, and in 2006 they stopped running for good.

The story doesn’t end there, though. Since closing the lifts, Sattelberg has become a haven for ski tourers, with the former pistes acting as an avalanche-free playground. Ever since hearing about it last summer, I’d been determined to visit it. So when the first snowfall of 2016/17 came my husband John, friends Pia and Benji and I made the 30-minute journey from Innsbruck to Sattelberg.

The start of the tour isn’t exactly filled with middle-of-nowhere, back-to-nature vibes. It’s right next to the Brenner Autobahn, a motorway that carries two million lorries a year and is one of the busiest thoroughfares in the Alps. But as we began skinning up the tree-lined slope we soon forgot about the concrete bridges and roar of traffic escaping from the valley. The snow was soft, the sky blue and the gradient perfect. We soon slipped into our own rhythm, sliding one ski in front of the other, and in no time at all lost sight of the road completely.

After an hour of skinning, we reached the Sattelbergalm, a mountain hut serving up delicious mountain food. Hundreds of skis were lined up outside the restaurant, along with a fair few sledges (there’s a popular toboggan run at Sattelberg as well) and tourers spilt out onto the terrace. I couldn’t help but wonder if the restaurant would be doing such good business if the mountain still had ski lifts.

We all agreed that a hearty soup is exactly what we needed before skinning to the top, so we took off our skis and clambered into the hut. The inside is rustic without being pretentious. There are traditional alpine decorations hanging on peeling walls and plastic tables topped with Instagram-ready cutlery holders. Even the 1970s style lamps have the names of local peaks stamped across them. All the usual alpine food is on offer; think Kasespätzle, Schnitzel and every kind of dumpling in existence. We all ordered Kassknödelsuppe, cheese dumplings in a clear broth. It’s just the kind of filling lunch you need when you’re burning 600 calories an hour. 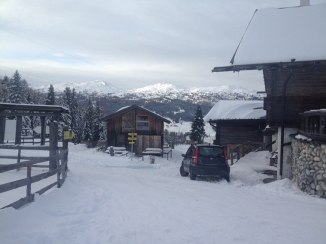 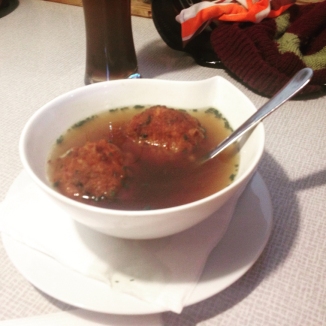 After a quick round of Schnapps (it’s good for digestion, honest!) we clipped back into our bindings for the final push to the summit. It was easily the hardest part of the tour, with the slope getting steeper and the trees thinner. By the time we broke through the treeline, the clouds had come in. I found myself struggling to slide my skis up the hill, battling not only exhaustion but gusty winds.

Near the top, the wind created another problem. It had swept away all the loose snow, leaving the face so bare and icy that my skins wouldn’t grip. I had to push my skis into the ground with every step, which made the final hundred metres slow and gruelling work. But after an hour I finally made it to the cross which marks the top of Sattelberg. I had been hoping for a classic alpine view over into Italy, but the clouds put pay to that. I didn’t care. The satisfaction of reaching 2133m on my own steam was worth far more than a good photo. And I was far too excited about the ski down to stand on a freezing cold mountain top playing with camera angles.

Skins off, I followed John down the piste. Despite the high number of tourers, there was still patches of powder to play in off the sides and we sped down the mountain with wide grins on our faces. Two and a half hours of touring for just a few minutes of downhill fun. But it was worth every rasping breath.