A plate filled with sugar-coated, fluffy, chopped-up pancakes and a large dollop of plum compote. Alpine food doesn’t get much better than this!

I don’t think any food in the world has such a great history behind it as Kaiserschmarrn, Austria’s beloved pancake dish. Actually, there are several different tales about the dish’s birth, all of them involving the Austrian Emperor Francis Joseph I (hence the name Kaiserschmarrn, which literally means Emperor’s mess).

My favourite story is still the first one I ever heard: The emperor asked a servant for some food from the kitchen. When the servant asked what he would like, he replied: “Oh, just bring me some Schmarrn” — some nonsense. The cook didn’t take to kindly to having his food called nonsense and angrily started hacking at the pancake he was cooking. Turned out, it made a rather delicious meal and Kaiserschmarrn was born. I don’t know if it’s true, but channelling the anger of the 19th-Century cook when making Kaiserschmarrn is all part of the fun.

Kaiserschmarrn itself has almost as many varieties as the legends surrounding it. Some are fluffy and light, some dense and crispy. Sometimes it’s served with Preiselbeeren (lingonberry sauce, much like cranberry sauce), sometimes with apple sauce and sometimes with plum compote. But all Kaiserschmarrn have one thing in common: They are delicious.

It took me a few attempts to achieve Kaiserschmarrn perfection. I tried it the easy way first, just using a basic pancake recipe. It was perfectly good (after all, it was coated in sugar) but it didn’t quite have the fluff factor I was after. So I tried a slightly trickier version, whisking the egg whites separately to really get some air into the batter. It was a lot more work but the result was dreamily-light cushions of pancake goodness. When topped with a dollop of plum compote and a sprinkle of icing sugar it’s easy to understand why Emperor Joseph couldn’t get enough of it. 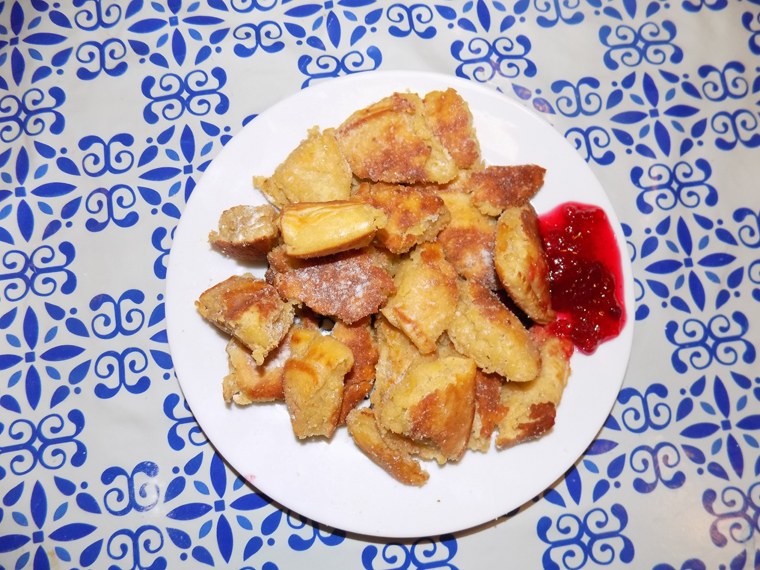 1. Beat the egg yolks and stir in the flour, vanilla essence and milk to make a smooth dough

2. Whisk the egg whites and 2 tbsp of sugar together until they form soft peaks

3. Gently fold the egg whites into the dough mixture, taking care not to lose too much air. Stir in the raisins, if using

4. Add a knob of butter to a non-stick frying pan and heat until melted and bubbling

5. Pour in the pancake mixture. It should be reasonable thick (at least half an inch). Cook over a medium heat until bubbles appear on top of the pancake. Slide it onto a plate and flip it over to cook the other side

6. Once the pancake is cooked through, use a spatula to tear it up into “Schmarrn”, little chunks of pancake. Then add a knob of butter and the last of the sugar to the pan and let it caramelise the pancake bits.

7. Serve with a sprinkle of icing sugar and a large dollop of plum, apple or cranberry sauce.